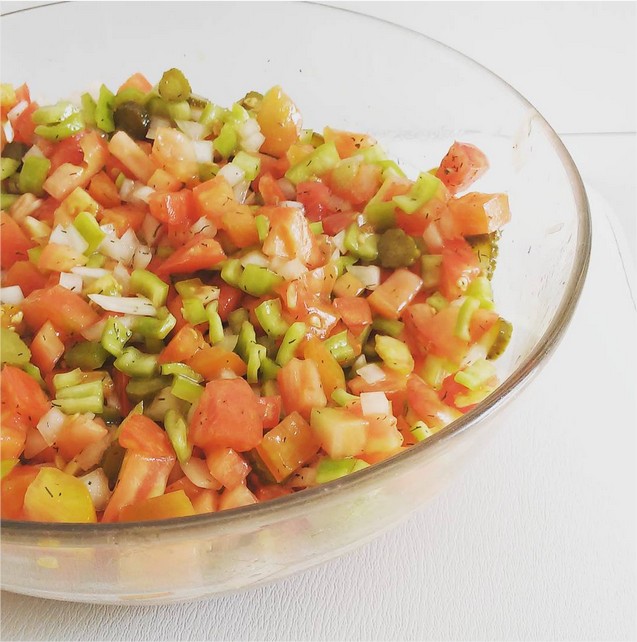 If we think about Mallorca and food, the first thing that comes our minds are the ensaimadas (a typical pastry) and the sobrasada (typical sausage). There are also some other popular products in the island, namely butifarras (sausages), caracoles (snails) and bred with tomate sauce and/or olive oil–which is not the most sophisticated dish on Earth, but good Lord, we love it, especially in the summertime.

Beyond the aforementioned Mallorcan typical delicatessen, there are also some other dishes that might not be as popular but you will not want to miss.

Trampó is a harmonious, well-balanced and refined dish consisting of tomato, green Mallorcan peppers and Mallorcan onion–olive oil, salt and nothing else.  This is just about as simple and healthy as delicious and refreshing–a great idea when it is hot. You can also find coca de trampó (trampó on top of a pizza-like dough)–which is just spectacular.

Tumbet is a traditional vegetable dish from Mallorca. It is available at almost every local restaurant on the island as well as other areas such as Castellon. Tumbet is often served along with fish or meat, but on its own it makes a good vegetarian dish. Tombet combines layers of sliced potatoes, aubergines and red bell peppers previously fried in olive oil. The aubergines and red peppers should not be peeled. The whole is topped with tomato fried with garlic and parsley and presented in a way that it looks like a pie without a crust.

Tombet is the Mallorcan version of the Occitan ratatouille or the Catalan samfaina. Influenced by those dishes, nowadays some people add zucchini to the mixture, but this is a vegetable that is not present in the original dish.

A popular dish in festivities in the island such as Christmas. In Mallorcan language, suckling pig is called porcella (feminine), hence its translation for lechona in Spanish. 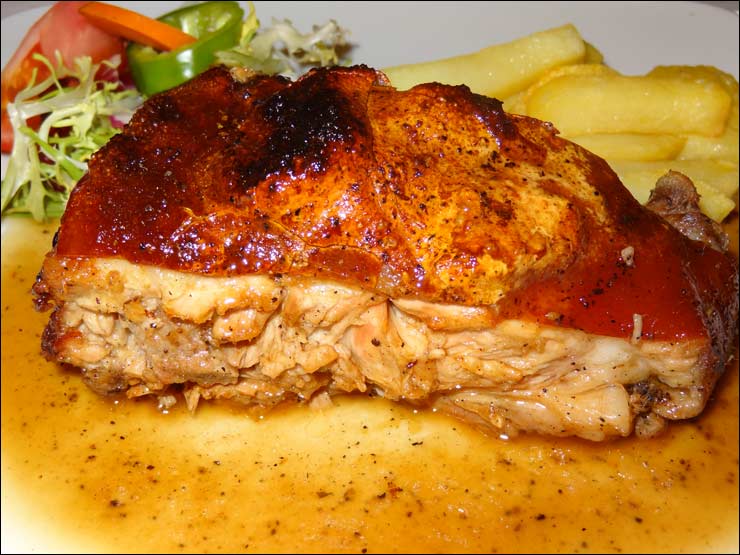 Very popular in the island, as the very name says–it has a lot of different variants. It is prepared with vegetables, along with thin slices of dried bread. Usually it comes with onions, pepper and cabbage.

Frito Mallorquin is an extremely delicious fried meat and vegetable dish that is enjoyed widely by the local in Mallorca. You can order this traditional Mallorcan dish in many Spanish restaurants all over the island and is often seen in Spanish buffets. It is prepared with lamb, onions, potatoes, fennel bulb, artichokes, red pepper, garlic, fresh peas, olive oil and baby leaf.

Arroz brut is a typical Mallorcan dish with a very easy preparation and low cost whose ingredients, out of rice, are meat and vegetables that we have in the fridge and we are not using during the preparation of other dishes such as chicken neck or liver, for example. It is a soupy rice and spicy, full plate, and of course, a Mediterranean dish. Due to its characteristics is cooked mostly when cold weather and once, even in current dates, used to be the starter in all kinds of celebrations. It is very typical in Mallorca the fact of meeting the whole family at grandparent´s house and find on the table “Arròs Brut”, especially in winter time.

After going through the previous dishes, it is turn now for a sweet one. This is typical from Palma de Mallorca that dates back from the 19th century. It is a sponge cake made with typical Mallorcan “quarto” filled with yolk and covered with meringue and chocolate. Sensational!

Cremadillos are just another typical sweet from Mallorca. Cremadillos are small empanada-shaped puff pastries with different salty and sweet stuffs, being the custard ones the most typical.