The Carnival of Cadiz: pure joy!

Every year in the month of February, life in Cadiz becomes a Carnival. The joy and the party fill the streets of this historical city and the people enjoy and dance to the rhythm of canivalesque music. When Don Carnal arrives, everything is possible because the people of Cadiz say goodbye to the strict social conventions and the tight restraints of the decent.

For 11 days, Cadiz is filled with partygoers who flow the streets aiming to laugh, sing and have some fun.

Teatro de la Falla Contest from the Carnival of Cadiz

It seems like the carnival in Cadiz is a cultural heritage from the ones in Venice in the 16th Century–boths cities had an enormous fruitful maritime commerce at that time period, although Cadiz ended up adapting to its own characteristics and features throughout the years. Nowadays this carnival is one of the most famous in the world and became part of the ten Treasures of the Immaterial Cultural Heritage of Spain.

The preparations start one month earlier, when more than one hundred official associations start rehearsing for the Teatro de Falla Contest. The chirigotas are, by far, the most well-known and they stand out from the rest of the shows for its dynamic and colorful visual characteristics. The associations also start preparing the gastronomic sessions of typical dishes from Cadiz, liven up with ironic funny songs that describe the country’s most significant issues during that year.

In The first Friday of the Carnival is celebrated the Teatro de Falla Contest Grand Final–it lasts until early Saturday morning and, in the end, it all explodes with joy in the streets. The associations that took part in the contest go across the city center, which is packed with people singing their own shows. The Choir Carousel takes place on Sunday and Monday across the streets.

It is mandatory to disguise, either individually or by couples, even in groups–looking forward to disguising is actually taken for granted. Verbenas, parades, processions, fireworks, costume balls and a thousand other activities prevent fun from stop. 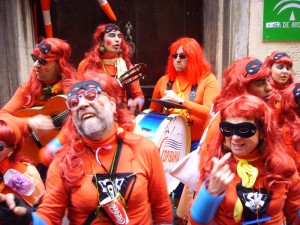 Chirigota from the Carnival of Cadiz

Be sure to mark you calendar because this year, the 2014 Carnival of Cadiz is held from February 27th through March 9th. Are you ready?