The Carthusian Monastery of Valldemossa

A winter in Majorca? Why not? It is not all about beaches in Majorca. We uncover a treasure that makes a winter getaway to the island worth your while: the Valldemossa Carthusian Monastery.

The French composer Frederic Chopin and his significant other, the writer George Sand picked Majorca in the winter of 1838-1839 as their location. Chopin suffered tuberculosis and the island seemed to be the perfect spot for him to recover, so they rented a chamber of the Valldemossa Carthusian Monastery and managed to get a piano sent all the way from Paris–his Pleyel piano. The winter was fruitful, artistically wise, and Chopin composed his Preludes Op. 28. As far as Sand, she wrote the book A winter in Majorca. Unfortunately for Chopin, his health did not improve too much and sold his piano to the Canut family before going back to Barcelona. This piano is exhibited nowadays in the chamber 4 of this beautiful Carthusian Monastery.

The monumental complex of the Carthusian Monastery of Valldemossa or the Palace of King Sancho, in Majorca, is the palace built by King James II for his son Sanç in the 14th century as their royal home.

After the Majorcan dynasty kingdoms and the arrival of the Aragon King, this palace was donated to the San Bruno order, becoming a religious building as Carthusian Monastery until the expropriation of Mendizabal in 1835, when it was split by lots and handed over to state and private hands.

The Carthusian Monastery of Valldemossa has been home to numerous distinguished guests. These guests contributed to the enrichment of the site: Ruben Dario, Miguel de Unamuno, Eugeni D’Ors, etc. Needless to say that this place became of the most emblematic places in the entire island. It is no one surprise that this place was picked by many, since it is a very unique mountain town that has known how to keep the essence throughout the years.

Are you willing to discover the Valldemossa area? We highly suggest you to take a look at the Sierra de Tramuntana post. Happy winter in Majorca! 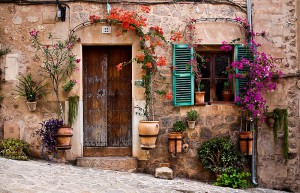