The caves of Majorca: an underground paradise 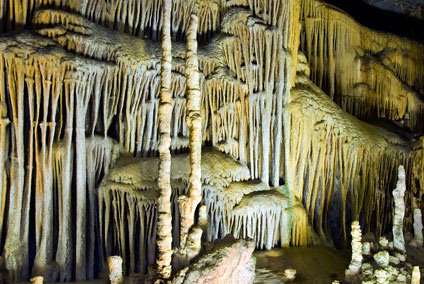 15th century. San Vicente Ferrer kept preaching all around the world and making miracles by raising a finger when he advised the Majorcans in one of his speeches: Majorca is empty in the inside. He compared the island with a large mud pot placed upside down, and although we do know now that this is nothing but a myth, it is very true that the island has almost 200 caves–only five of them can be visited.

In the 19th century, the archduke Luis Salvador became interested in this hidden underground world. He reached out to geologist Edouard Martel, who discovered the Caves of Arta in 1856.

Caves of the Drach, Majorca

Galleries, stalactites, underground rivers, lakes in cavities…the island hides a whole subterranean world. Adventurers, get ready! We are going deep into the subsoil of Majorca.

Located in Capdepera between mountains by the sea, the Caves of Arta are thought to be discovered by the primitives that inhabited the island. The stalactites found there are simply amazing, of very humongous dimensions and astonishing shapes. It stands out “the queen of the columns” of 20 meters of length.

In your visits to the Caves of Arta, you will definitely be entertained at “the Hell”, where light and sound shows takes place. You do not want to miss “the Purgatory”, full of carbon stones that resemble diamonds. This sure sounds like we are in the heart of a paradise. 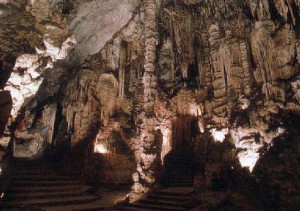 Coves of Arta. The queen of the columns, Majorca.

Located in Campanet, in the heart of Sierra de Tramuntana, these caves are to be found on the Palma-Port d’Alcudia road, km 39. There are numerous cavities, with a 3200 square meters and 400 meters of length.

Fantastic calcareous-rock galleries are waiting for us, with awesome thin white stalactites and stalagmites. Paleontological remains from Myotragus belearicus are found it its interior–an animal that extinguished 5000 years ago that is genetically related to the sheep.

Furthermore, these caves are in the Valley of Sant Miquel, as well as the very ancient Gothic church of San Miguel from the 13th century. It is simply an incredible setting. 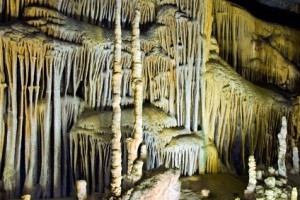 CAVES OF THE DRACH

Close enough from Porto Cristo we find the most famous caves from Majorca, the Caves of the Drach. In its interior, it stands out the 177-meter long and 30-meter wide Lake Martel. A musical concert is held during the visits.

The lightning in these caves are one of the most impressive and magical, designed by the Catalan engineer Carles Buigas, also known as the light magician.

The stalactites and stalagmites in these caves remind us in many occasions of figure, some of them have been baptized as the Virgin of the Cave, the Venus of the Nile or Buddha.

In Palma de Majorca, in the Genova neighborhood, we find the 36-meter depth Caves of Genova.

The special feature of these caves is a formation called coraloires, created by magnesium, nothing less than 4 million years ago.

Nature shapes are often pretty random, and in the Caves of Hams the formations do look like trees, similar to fish hooks (hams), which are the result of the currents and the constant work of spiders. In its interior, in the Sea of Venetia, musical concerts are held as well.

The Caves of Majorca in the map:

If speleology is your thing or would like to give it a try, there are lots of companies in Majorca that offer guided plans for all levels.

Some caves are suitable for adventurers who want to practice speleology, this is the case of Cave of Coloms, in Manacor–accessed swimming! The Caves of Llagrimes, an underwater cave, or the Caves of Sa Gleda, also in Manacor and with almost 11000 meters, is the biggest submerged caves known thus far in the European continent.