The Colomares Castle, in Benalmadena

The Colomares Castle, in Benalmadena, Malaga, is a castle-shape construction; however it never was a castle. Actually, this was a very recent monument dedicated to Christopher Columbus and his greatest historical milestone: the Discovery of America. 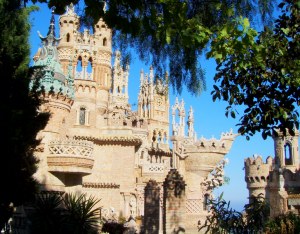 We are here talking about an architectural fantasy made with a great array of architectural styles: Byzantine, Romanic, Gothic and Mudejar–styles that marked a milestone in the world of arts in our country–a huge homage paid to the cultures that help enriching the culture of these lands,

This phenomenal monument, made by Esteban Martin and finished in 1994, has symbolic elements of the Catholic Monarchs (sponsors and funders of this adventure) and the three cultures that coexisted in Spain at this time period, namely Christianity, Judaism and Islamism, as well as elements from the journey of Columbus to the New World.
Rent an economic vehicle at Malaga Airport and pay your personal tribute to this impressive monument dedicated to Christopher Columbus.