Five tips to celebrate an “Olé” Christmas in Malaga

Malaga is totally decked out in Christmas with lights, joy and charm. The city welcomes the month of December with its most beautiful face: the streets are decorated with light and color, outdoor nativity scenes, skating rinks, concerts, gigs and flea markets…

All of the above is accompanied by the southern sun–yes, you read it well, sun in December. Visitors can definitely enjoy themselves spending a pleasant morning in the beach and even sun bathing.

If you want to have a blast during the celebrations of the Christmas in Malaga, you definitely do not want to miss the 5 tips we have prepared for an “Olé” Christmas. 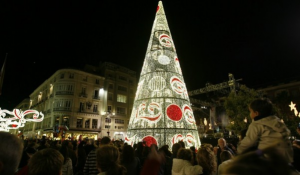 Christmas decoration and illumination in Malaga

Setting a nativity scene in Malaga is a rooted tradition. It has also become a tradition for quite some time now to visit the most impressive nativity scenes. We are talking about an open exhibit of around 45 nativity scenes that are set up throughout the entire city.

Amongst the most interesting nativity scenes of them all, we would highlight the Plasticine Nativity Scene (at the Municipal file database) or The Glass and Crystal Museum Nativity Scene, made out of porcelain figures made by Lladró.

If you happen to get out of the city, you might want to consider visiting the Mijas Nativity Scence, which is well-known because it exhibits the real Jesus Infant’s birth in an actual nativity scene: the cave’s cavity or rather, the Mijas Scene. 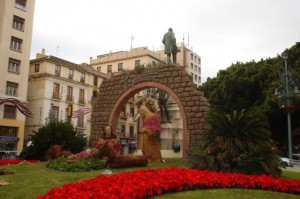 Get excited with the street pastoral concerts and gigs all around the city of Malaga. We would describe them as touching, especially with the beautiful Christmas decoration and illumination. Every year, a contest of pastoral concerts is held, and the winner group will be in charge of performing that year’s Midnight Mass.

Declared Heritage of Cultural Interest, The Great Celebration of the Verdiales is a celebration of rural origin that is held every December 28th. It is a fandango that can be both sung and danced and can be accompanied by a Verdiales band, namely a violin, two or three guitars, a tambourine, cymbals and sticks or castanets.

Inherited from the Malaga Hills, its name makes reference to the olive region of Los Verdiales (verdial is an olive variety). A Verdial is a singing and dancing style, which is even older than the Flamenco; a folk singing made for dancing.
The Great Celebration of the Verdiales. 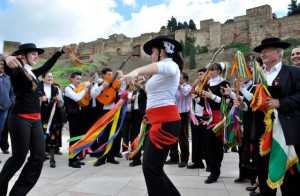 The Great Celebration of the Verdiales.

Remember: Malaga offers sun during the entire year! Maybe it will not be 30º (Fahrenheit) but you can still get very sunny days in the wintertime that will invite you to enjoy the sun and the beach. Do not be surprised if you see people in the beach sun bathing and, why not joining them?

The Alameda Park of Malaga is home to the traditional Christmas Flea Market. It has over 160 stands with Christmas items, craftsmanship and books.

The Flea Market will be waiting for you until January 5th, every day from 11am though 10pm.