Gastronomic Route for the Christmas sweets: the Turron

Christmas is right around the corner and with it, the most well-known sweet, the Turron. This delicious dessert comes back around every year to both our households and palates.

Although Christmas is still a few weeks away, grocery stores, supermarkets and large department stores already offer turron, marzipan, chocolate bars, polvorones (sort of Andalusian shortbreads) and a few other sweet pleasures for us to start practicing 😉

As we said earlier, without any speck of a doubt, among all of the Christmas products, the big star is the turron from Alicante, which even has a Regulating Council that has become popular overseas. The main ingredient will have to be the almond, a Mediterranean fruit that is mixed with sugar, eggs and honey in order to provide us with a outstanding gastronomic gem at a very affordable price. 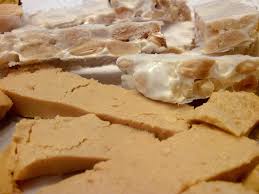 The vast majority of the turron factories are located in Alicante, with a broad centennial tradition–some of them still preserve ancestral manufacturing methods. Among the traditional ones, the two more spread are the Alicante’s Turron (whole almonds hard turron) and the Jijona’s Turron (with a soft variety also known as Xixona). It is also worth mentioning the Obrador Turron, Stone-cooked Turron or the Terronico.

After all we have described above, we wonder: is it not the best moment to visit Alicante and make a gastronomic route? As the song goes: Christmas, sweet Christmas…

Xixona, in Alicante, is well-known as the city of turron. You definitely do not want to miss it; be sure to visit the Museum of Turron, an exciting journey to the 16th century. You will be able to visit different factories where free samples are served and well as store where you might want to get some souvenirs and gifts for the upcoming Christmas.

Video “500 sweat years, the great history of Turron” by the Regulating Council of Jijona and Alicante’s Turron: