The Sierra de Tramuntana is a tour through the northwestern coast of the island of Majorca. It goes along the edge of the Mediterranean Sea and through a magnificent typical Mediterranean landscape.

In our yesterday’s post, we left off in Valldemossa in our road trip along this mountain range. Today, we would like to resume it so that we can head to Cape of Formentor. Breathtaking cliffs and view points, a delicious gastronomy and an urban landscape with a great deal of charm are waiting for us.

Settled in a little hill by the sea and protected by the Puig de Teix, Deia is a picturesque town that was home to numerous artists and poets. The English writer Robert Graves, the archeologist William Waldren, or the archduke Luis Salvador de Austria, became fascinated by this place throughout the history. As a current emblematic celebrity, the actor Michael Douglas also owns a property in S’Estaca and he is usually seen walking around Deia.

The Small Bay of Deia is a perfect corner where visitors can enjoy a pleasant bath in crystalline waters.

SOLLER AND THE PORT OF SOLLER

Soller is another gorgeous coastal town in northern Majorca; it also has the typical charm of this region. Soller has the very first electric street car of the island, and to this day, it is still active–this ancient train departs from Soller to the Port of Soller. Passengers cross an amazingly beautiful valley with precipitous mountains.

On a gastronomic side note, we would highly recommend you to try the handmade orange ice cream made with fruit from Majorca at the Soller ice cream factory.

Very close to Soller, heading towards Pollença, we find the Puig Major peak and we will pass by the Monastery of Santa Maria de Lluc (that is, from the sacred forest), a peregrination place built to worship the Virgin of Lluc. We arrived to Pollença. Surrounded by mountains and pine forests, and located by the sea, it is a settlement of Roman origin that knew how to keep, to this day, the medieval flavor of the ancient stoned streets.

Climbing to the Calvary of Pollença is a tough ascent of 365 steps; however the views that are waiting for us will compensate our effort. We will obtain our reward with the panoramic view of the entire littoral from Soller all the way to Cape of Formentor.

The Bay of Pollença and its port are a lively area in which we can practice nautical sports and where the majority of the best beaches of the island are concentrated. 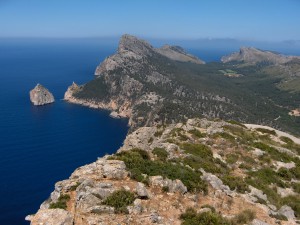 Cape of Formentor in Majorca

If hiking is your thing, you can uncover this mountain range through its multiple on-foot routes. One of them is the Piedra en Seco (Dried Stone) route, from Andratx to Pollença–150 kilometers divided in eight phases that go by ancient paths.

Would you like to rent a vehicle to make this route? We invite you to do it at our Majorca Airport rental car office.