Life’s a carnival: the 7 most Instagramable carnivals of Spain 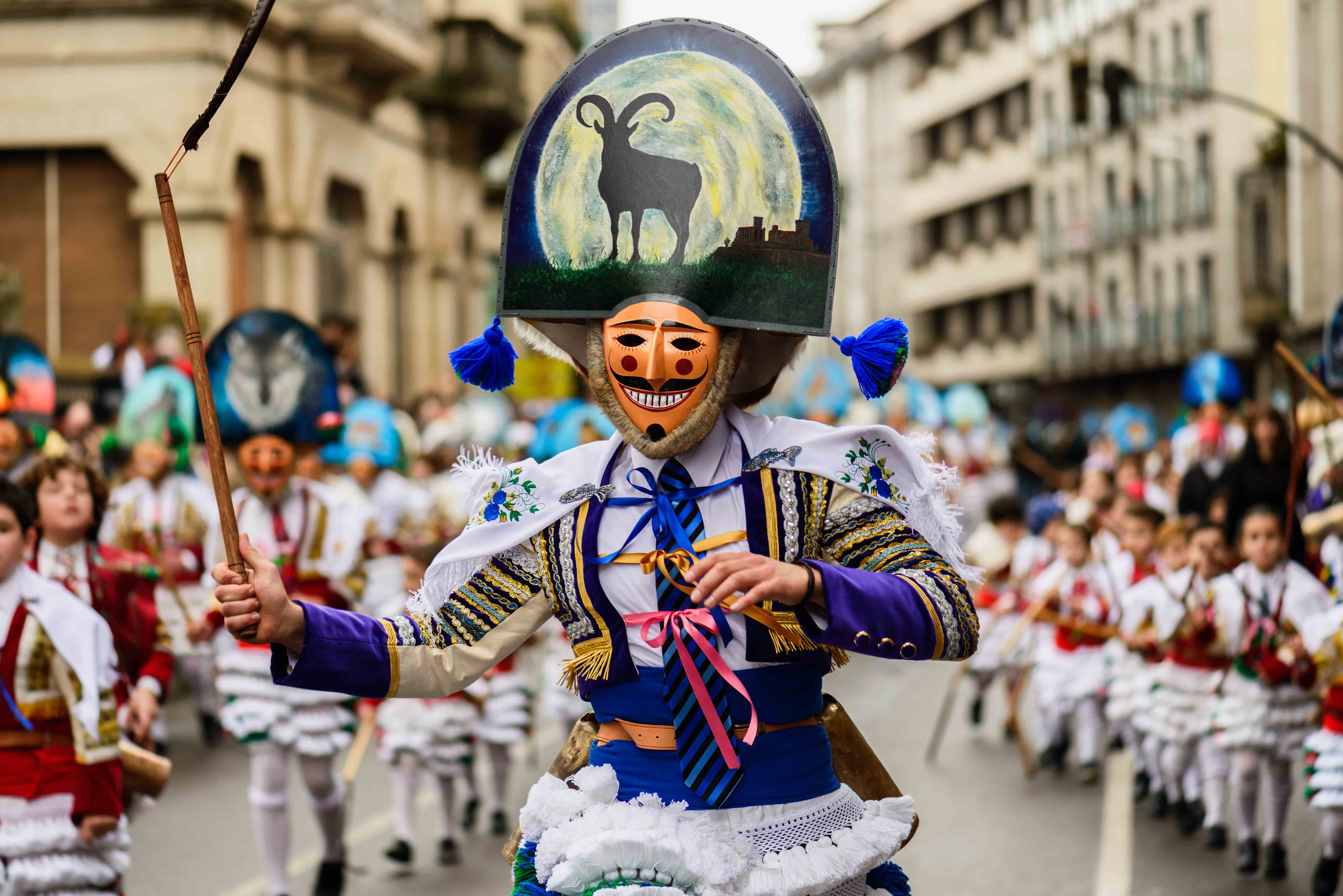 It is that time of the year for the Carnivals. Spain does not take a second place when compared with other carnivals around the world. The Carnival of Santa Cruz de Tenerife ranks among the best carnival lists worldwide. There are lots of Spanish Carnival festivities declared International Tourist Interest Festivity, namely the Carnival of Cadiz or the aforementioned Carnival of Santa Cruz de Tenerife. Every year, thousands of both national and international tourists attend to one of these festivities in order to enjoy the festive atmosphere and the magic of the costumes, parades and rides. This is actually why we would like to provide you with a list of spectacular carnivals in Spain and its most important events so that you can fill your Instagram account with the most original pictures!

Before figuring out why is it worth becoming part of the Spanish carnivals featured here, we are going to remind you that most of them have the following in common:

The vast majority of the Spanish carnivals preserve the essence of being kind of a farewell party before entering the Lent period. An important part of almost every carnival will always be the battle of the Ash Wednesday between the figure of Don Carnal—who represents the sin and the earthly pleasures—and his antithesis Dona Cuaresma—who symbolizes the culturally correct, the chastity and fasting. The carnival is also known as the celebration loaded with social criticism, hence lots of songs and representations carried away by Murgas (a form of popular musical theatre performed during the Carnival season), chirigotas (a genre of Spanish choral folksong originating in the Province of Cadiz) and even troupes have a strong satirical component—always in a humorous tone. Besides its parades or its rides, there are many carnivals in Spain that also include contests and choir performances on its programs. Last but not least, there are also many carnivals where it is still preserved the classic flour battle or the legendary sardine burial the very Ash Wednesday, which means in the majority of carnivals a way to finish the festivities, although in Murcia, for example, means the total opposite.

Now, after this prelude, we present here our list of carnivals in Spain that you do not want to miss:

1. Carnaval of Vinaroz (Castellón, Valencian Community): the most Mediterranean

This carnival, which is on its way to become National Tourist Interest Festivity, not only for its crowded Gala de las reinas, where the rides exhibit its spectacular costumes, stands out by the theme nights namely the pajama night, the crazy night (la nit boja) and a theme night that changes every year. Also worth mentioning the paellas day, for sure.

2. Carnival of Cadiz (Andalucia): the most legendary

This is, hands down, the most well-known carnival of Spain. At this International Tourist Festivity declared carnival you will not want to miss the Official Contest of Carnival Groups at the Gran Teatro Falla. Of course, you do not want to miss either the Cabalgata magna (Magna Ride). In Cadiz, the carnival’s magic is in its streets, and the people participating in an active way in its rides and official groups parade interpreting in public its repertoire with a spicy touch of social criticism—always in a humorous tone. We cannot forget about the “illegal” groups—these are groups outside the COAC (Concurso Oficial de Agrupaciones de Cadiz—Official Contest of Groups of Cadiz) that also play an important role in the festivities with its parodies of the official groups, full of humor and irony.

3. Carnival of Laza (Orense, Galicia): the craziest one

This carnival (or entroido in Galician language) is as original as it gets and it is considered the oldest one of this autonomous community. It is full of emblematic moments. It is worth participating in the route that takes place the Friday before the Ash Wednesday through the streets with torches (fachós). Also, we are telling you that you have to witness the peliqueiros parade, where the main characters of this carnival, with their cowbells and whips, walk around the streets of Laza sowing chaos. As a curiosity, each and every one of the customs can weigh up to 25 kilograms. Needless to say that, you have to take into account the farracada—interesting battle where mud-stained rags are used as a weapon—this is a must-see. In addition to that, by the end of the day, when the peliqueiros rest, it is the time of the bajada de la morena (a baixada de Morena). The morena is a cow that walks around the village accompanied by, a group of people who hits the spectators with giant branches. The cow also accompanied by series of characters who toss over the spectators cool soil and alive ants that have previously been sprayed with vinegar so that they become more aggressive. In addition to that, while the spectators of the parade are attacked con with soil full of ants, a wild flour war breaks out—just a jaw-dropping visual spectacle.

It is worth mentioning the rivalry of this carnival with the neighboring villages of Verin and Xinzo de Lima. The three villages together form the magic triangle of the Entroido, although the Carnival of Laza is the only one out of the three that still has not being recognized as National Tourist Interest Festivity—although it holds the title in the autonomous community.

There is no need for introduction for this carnival. The Chicharrero Carnival (chicharrero is a name given to the inhabitants of the island of Tenerife) is considered the second most important after the one in Rio de Janeiro. We do believe that this carnival deserves a place in the podium of most instagramable carnivals. Also declared International Tourist Interest Festivity—from this carnival we pick the Gran Gala de Eleccion de la Reina del Carnival (the Carnival’s Queen Election Great Gala)—which marks the official start of the carnival. The cabalgata anunciadora (the announcing ride) and the cabalgata de clausura (closing ride), known as the Gran Coso Apoteosis. Also, this celebration is full of anecdotes: it appears in the Guinness Book of Records thanks to a great ball that was featured by Celia Cruz and could survive the censorship of Franco changing its name to “Fiestas de Inviero” (Wintertime Festivities).

5. Carnival of Las Palmas (Canary Islands): the most artistic

Considered by many as one of the oldest carnivals of Spain; its origin dates back five centuries. This was the first carnival to include on its program the Gala Drag Queen. The main difference between this show and the carnival’s queen contest is that, in the second everything is about the costume and the queen’s beauty, while in the Gala Drag Queen of Las Palmas they search for this spectacular component with the musical show performed by the participants on stage. So, the artistic talent will be the determining factor for the winner of this contest. Also, we would like to point out as original events of this carnival of Spain, the Canine Carnival and the Body make-up contest.

6. Carnival of Aguilas (Murcia): the most authentic

Also declared International Tourist Interest Festivity, this carnival has its own oficial drink—La Cuerva. This festivity has really interesting events such as la Suelta de la Mussona—one of the most representative characters—the paper-costume contest and, of course, the Carnival of the Night. Also pretty picturesque, the habit of tossing confetti-filled egg shells during the infant version of the traditional Battle between Don Carnal and Dona Cuaresma. Although, the best of Aguilas hands down, as Carlos Baute said in 2016 when he was a crier, are the weather and its gastronomy and, especially, its people. The aguilenos give it all to make this carnival one of the most acclaimed in the country.

7. Carnival of Badajoz (Extremadura): the most musical

Although the troupes are a common element in all carnivals, the ones in the Carnival of Badajoz are considered the best in Spain. This is a National Tourist Interest Festivity and leaves nobody indifferent with its music and parades. The whole city gets involves in the festivities of the carnival, becoming Badajoz a great festivity full of color and music. One of the most anticipated events of these festivities of Badajoz are the Fiesta de las Candelas and its Tamborada, since this is the event that marks the commencement of the carnival. Also, we are in love with the “Turuta de plata” award which is what the winning murga is awarded with for the best reflection of the sentiment towards the C.D. Badajoz (city’s soccer team) in a song.

So far so good with our list of the most instagramable carnivals of Spain!

We hoped you loved it. If you think there is another carnival worth mentioning in this list, please be sure to leave us a comment!