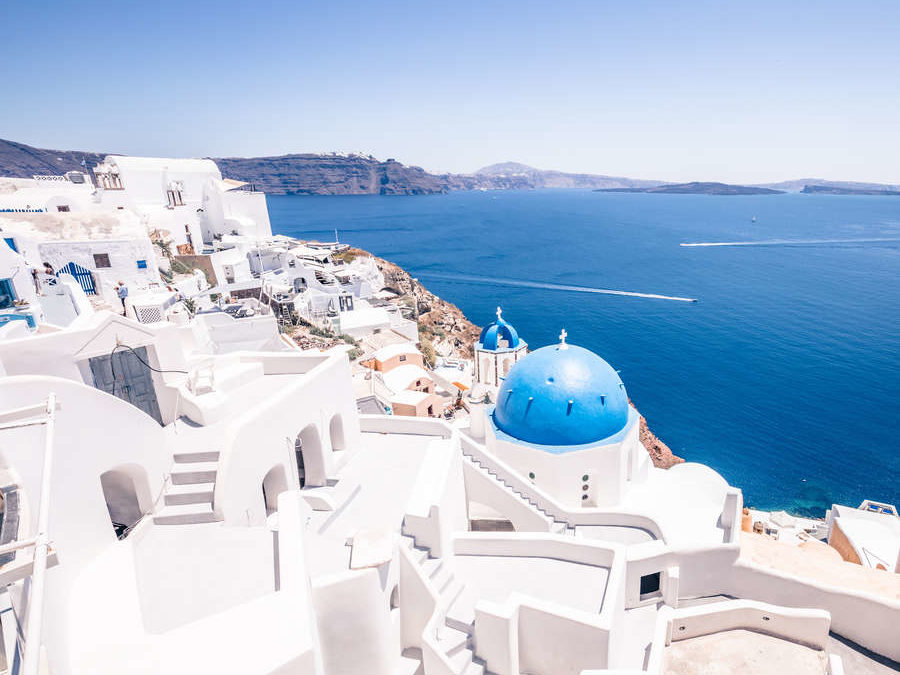 This post is also available in: Spanish German Portuguese Greek

One of the most sought-after trips by tourists is a tour of the Greek islands. Greece has more than two thousand islands spread over the Aegean and Mediterranean Seas. The magic exuded by its crystal-clear blue waters and its white-washed villages are two of its greatest attractions.

If you want to explore the most beautiful Greek islands after visiting the country’s emblematic cities, either with a car hire in Athens or a vehicle rental in Thessaloniki, here’s Record go’s list of the most beautiful islands in Greece.

The most beautiful Greek islands

It might be the best-known Greek island. And there is good reason for that! It has all the charm that tourists who want to soak up the essence of Greek island life are looking for: white houses with blue, tiled roofs and doors that match the colour of the surrounding sea.

Santorini is part of the Cyclades Islands and its incredible black sand beaches serve as a constant reminder of the island’s formation in a volcanic eruption. When visiting Santorini you must see its capital, Fira, as well as Oia, perhaps the most popular and beautiful traditional Greek village.

The landscapes of Corfu, from its olive trees to its beaches bathed in turquoise waters, combine in beauty and perfect harmony. In addition, its great cultural heritage, especially from the medieval period, and its neoclassical Venetian fortresses – palaces built by the Empress Sissi – make Corfu one of the must-see Greek islands that you have to visit. There’s so much to see in Corfu.

Milos is a volcanic island whose historical treasure lies in its archaeological sites – the Venus de Milo was discovered here, although it’s now exhibited in the Louvre Museum in Paris. If you add to that paradisiacal beaches and its typical Greek fishing villages, anyone who comes here falls in love with the place.

It’s a wonderful place to take a boat ride to enjoy the beautiful natural landscape of the Cyclades archipelago.

Not only is Mykonos a party town night and day, but the beauty of locations like Chora, its capital, and its villages with cobblestone streets, full of brightly coloured houses, are a real delight for visitors. It’s considered to be one of the most beautiful Greek islands, worth visiting if only to see its windmills and Little Venice. And if you’re not sure what to do, check out all the things to see in Mykonos.

Naxos is the ideal Greek island if you like getting lost in narrow streets. Here you’ll discover one of the bastions of the country’s heritage: the Portará or gate of what remains of the ancient Temple of Apollo.

On Crete, there are beaches with crystal clear waters and villages with beautiful natural landscapes full of history. The Palace of Knossos and the labyrinth where popular history says that the famous minotaur of Greek mythology was imprisoned are more than enough reason to visit Crete.

Rhodes is part of the Dodecanese archipelago, with part of its appeal to be found in its medieval historical heritage, its large walls and palaces and ancient temples scattered between the Old and New city of Rhodes. But the magic doesn’t end there, after all, it’s home to the famous great Colossus of Rhodes.

In addition to the 7 most beautiful Greek islands on this list, there are many more that you will surely want to discover, but with this tour, you can get an idea of what makes the Greek islands so famous.