A village under the rocks: Setenil de las Bodegas

Some time ago, we made a big tour through the White villages from the Serranía of Ronda and Cadiz by car.

Today, we would like to stop by one of these villages, Setenil de las Bodegas, a village whose roof covers the rock that was impregnable for the Christians in the reconquest period. 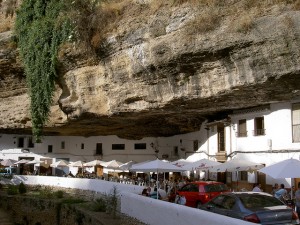 With steep streets and whitewashed houses, Seteni de las Bodegas, is outstanding because the houses were built taking advantage of the spaces in the rocks created by the wind’s and water’s erosion. Literally, in Setenil de las Bodegas there are no roofs, there is no sky, there is just mountain and their rock. What better protection for the cold and better sun umbrella to be protected by the south’s sun?

Just like we were anticipating earlier, this unique architecture has protected the village from enemy attacks. Its name comes from Latin “septem nihil”, which means seven times nothing. Seven was the number of times the Christians tried to conquer this place from the Muslims and zero were the times they accomplished it.
From its Muslim legacy, still is preserved the Medina from the 13th century. On the other hand, the Christian church from Our Lady of the Incarnation is a mixture of both Gothic and Mudejar styles. A fusion and a example of the multicultural diaspora of this área.