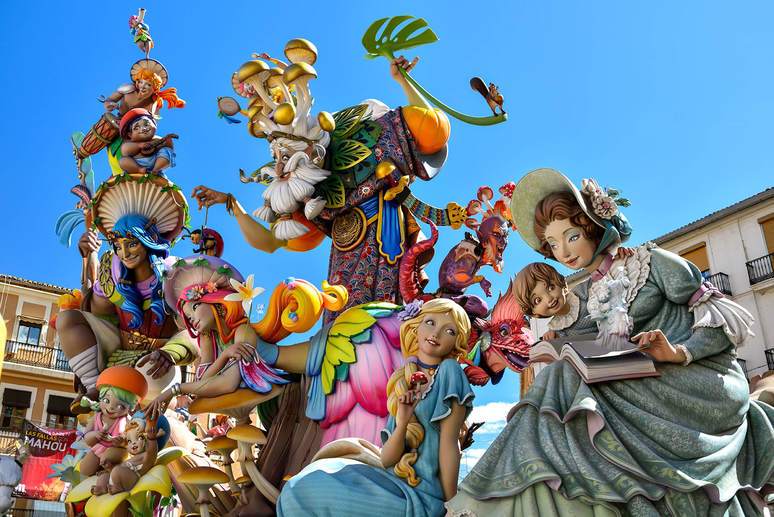 ENJOY THE FALLAS 2022 IN YOUR HIRE CAR

What are the Valencia Fallas and when are they held?

The Valencia Fallas is an annual festival celebrated in honour of San José, patron of the carpenters. This year they are being held from 15 to 19 March. If you’ve planned a getaway to Valencia over these dates, don’t miss the opportunity to discover the Fallas in your hire car.
The Valencia Fallas are characterised as festivals linked to tradition, art, fire and satire, where gaiety and entertainment are a central feature from start to finish. They include the well-known "ninots", great artistic works in cardboard that rise in human forms to generate satirical or comic scenes —many of them are millions worth. After being exhibited in the streets for several days, these “ninots” are publicly burnt, thus bringing the festival to an end.
Drive directly to the Cuba-Puerto Rico falla celebrations in your car to enjoy the street light displays or park your hire car nearby at Calle Menéndez Pidal and enjoy a stroll along the boardwalk, taking in all the monuments that you will find there. You can also watch the Nit del Foc fireworks show that will begin on the evening of 18 March.

Enjoy the Fallas de Valencia in your hire car

Many of the streets in Valencia will be closed to vehicles during the Fallas, but every year the city council provides parking areas for everyone who decides to visit the city over these dates:

If you get there by car, in addition to exploring and enjoying the Fallas celebrations, you will also be able to take advantage of your hire care to drive to the beach and taste some delicious rice dishes, discover the Albufera if you’ve never been before, and just generally appreciate being able to get around the area quickly and easily.

Why visit the Valencia Fallas?

Who wouldn’t want to enjoy five days of celebration, music, colour, fire, tradition and culture surrounded in the streets by art and satire?
The Valencia Fallas is an event marked on the calendar not only for all Valencians, but also for all the city’s neighbours (from nearby towns or cities), and for all national and foreign tourists who’ve had the chance to experience the festival in the past.
The Valencia Fallas have been recognised by UNESCO as a “Festival of International Tourist Interest”, including it in its "Representative List of the Intangible Cultural Heritage of Humanity".
Thousands of tourists choose the Valencia Fallas as an event to enjoy on their holidays. And there is nothing more exciting than walking through the streets of Valencia, raising your head and seeing all the "ninots" one by one, enjoying its live satire, listening to traditional and modern music, the street performances and the mascletàs. Smelling the gunpowder, the freshly made paella and, finally, the smoke of the "cremà" or burning of the ninots. And thus are the Valencia Fallas experienced daily with the five senses. Who wouldn’t want to experience them?

Getting to know Valencia during the Fallas and the rest of the year.

Valencia is a beautiful city, with or without Fallas, so we invite you to get to know it, and there’s no better way to do so than at your own pace, according to your own timetable and without limitations.

Which is why Record go offers you the very best car rental rates so you can visit the city of Valencia and enjoy the Fallas. Take advantage of our special offers and don’t miss out on any corner of the city.

Move about freely with Record go!

Valencia Joaquín Sorolla
From
6,67 € / day
We use our own and third party cookies for analytical, advertising and profiling purposes; processing data necessary for the elaboration of profiles based on your browsing habits.
Accept all
More information and configuration*
*This option allows to refuse all.