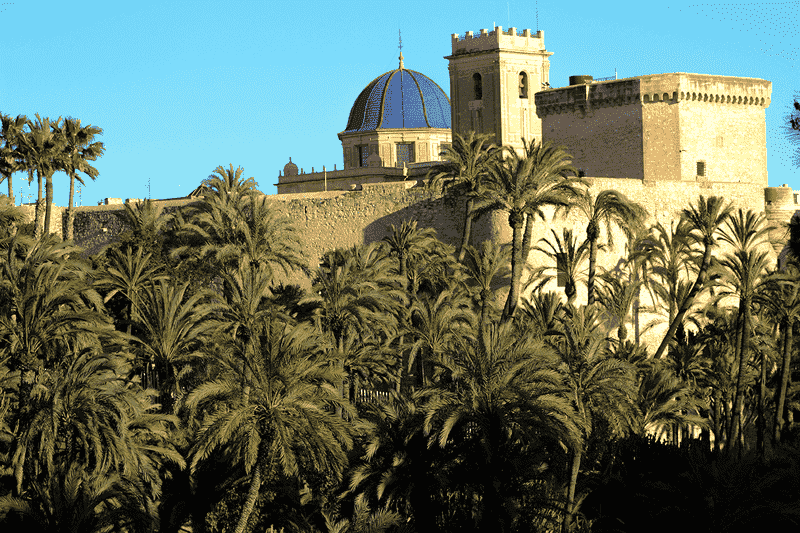 What to see in Elche? Drive from Alicante with your car hire

Although some tourists may miss this town, choosing to visit other coastal destinations instead, Elche is an essential place to visit if you travel to Alicante. You can rent a car at our Alicante Airport office and set your own route.

And you can see its Iberian, Roman and Arabic past in all of its buildings, and there is also a wide array of culture to discover there.

As you wander the streets you will be able to explore a number of fascinating ancient ruins, such as the Arab walls, the Alcázar de la Señoría or the Arab baths. You should also make sure to visit the Basilica of Santa María, with its Baroque architecture, and the Calahorra Tower, the town’s ancient fortress.

Elche is the only town in Spain with three cultural assets inscribed in different Unesco World Heritage categories, so the first thing you should do when visiting the town is go and see these three wonders.

La Dama de Elche (the Lady of Elche) is one of the most famous Iberian sculptures in the world. If you would like to learn about its history, you can visit the Interpretation Centre at La Alcúdia Archaeological Site. Here you will be able to discover the place where the sculpture was originally hidden, and where it was found 22 centuries later.

El Palmeral de Elche is included in the “cultural landscape” category, and is a palm grove that is unique to the European continent. El Palmeral is a man-made landscape produced during the Al-Andalus period for intensive farming.

El Misteri de Elx (the Mystery Play of Elche) was declared a Masterpiece of the Oral and Intangible Heritage of Humanity by Unesco in 2001.  It is performed in August every year at the Basilica of Santa María in Elche to celebrate the Virgin of the Assumption. The play was written in the Middle Ages and is one of the gems of Valencian artistic heritage.

Shopping and entertainment in Elche with your rental car

Elche also has more to offer aside from culture. It’s the perfect town for enjoying a day of family activities, with amusement parks, natural spaces and even an ice rink. The town also has a long tradition of textile production, with footwear being their main speciality, so you shouldn’t leave without buying yourself a new pair of shoes. In terms of cuisine, just like many other towns in Alicante, Elche is well known for the quality of its raw materials and its local dishes, such as arroz con costra (rice with a crust).

If you visit in winter, you should make sure you stop by the Elche Ice Rink. It is 500 square metres in size and the perfect place for practising ice skating, whether it be for fun or for sport. Enjoy a unique day at the only ice rink in the province of Alicante.

Just 7 kilometres from the town and the Alicante-Elche International Airport you’ll find Ruta Outlet Elche, an essential visit for shoe lovers. This shopping centre is located in the Elche Business Park, where you can find more than 700 companies from every different industry, but of course the most important are the stores that sell footwear and textiles.

If we were to highlight just one dish from Elche, it would have to be arroz con costra. Although this is also a traditional dish in the comarcas of Marina Alta, Baix Vinalopó and Vega Baja, it is the town of Elche that earned the Guinness World Record for cooking the largest arroz con costra in the world, using 1500 eggs and 100 kilos of rice.

As you’ve seen, the town of Elche, located just 20 minutes from Altet Airport, is an essential destination to visit with your hire car, so what are you waiting for?

Cheap car hire in Alicante - Record go rent a car
What to see in Benidorm
Rent-a-car Alicante
We use our own and third party cookies for analytical, advertising and profiling purposes; processing data necessary for the elaboration of profiles based on your browsing habits.
Accept all
More information and configuration*
*This option allows to refuse all.