The Caliphate Route: from Cordoba to Granada. A walk through the Al-Andalus part I

The Iberian Peninsula had its share of splendor under the Muslim control. Al-Andalus was a civilization born from the mixture of cultures and rich crossbreeding between the Western and Eastern worlds. Eight centuries of existence and cultural splendor that indeed marked the history of Spain.

In today’s post, we take you around in a route that will help you deepen in the wealth and the legacy of the Al-Andalus. This is the Caliphate Route, a walk around Cordoba and Granada with a wide patrimony and outstanding appeal; included as Cultural European Itinerary.

This route unites the Caliphal Al-Andalus (Cordoba) with the Nasrid (Granada). This was route used by many merchants from all over the world in the middle age; as well as a science, arts and knowledge communication way, since these two cities were knowledge capitals and ahead of their time back then.

First and foremost, we will have to rent a vehicle at Malaga Airport and discover the history and great patrimony that the Al-Andalus left us.

A little bit of History…

In the 8th century began the Islamic occupation in the Iberian Peninsula–a booming civilization came from northern Africa. Noble families started to settle in Al-Andalus soil in a pacific and prosperous coexistence with the then-Hispanic/Gothic culture–creating a very peculiar culture. A dynastic break up took place in latter part of the 8th century in the Islamic world of the Omeyas, and Abderrahman I came to Al-Andalus running away from Damasco in order to establish a new State in Cordoba. This is how the political Islamic control started, with an emirate of their own which lasted three centuries and was able to maintain a perfect coexistence among Berbers, Arabs, Hispanics and Jews. The Cordoba Mosque dates back from this specific time period.

In the year 1301 the Caliphate of Cordoba was abolished and the Muslim power started to dismember, as well as a few dynasties that lasted four centuries. These dynasties wanted to control the country, or at least their cities. The Nasrid dynasty, settled in Granada, was the one to put up the most resistance against the Castilian and the last one to fall apart. Granada a remarkable big city, and witnessed the birth of the Alhambra, but the pressures and instability forced the King Boabdil to hand the city to the Catholic Monarchs in 1942; putting to an end eight centuries of Araba presence in our soil and the state of Al-Andalus.

Granada is controlled by its Alhambra (the red fortress), a palace complex and one castle that gave shelter to the monarch and the Nasrid Kingdom court.

Once you hit this city, you do not want to miss the amazing tapeo available for you.

Pinos Puente is a charming town with fertile grounds. 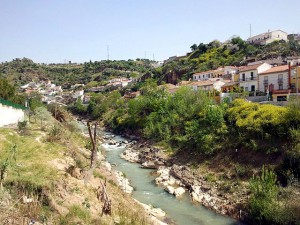 Cubillas River in its way through Pinos Puente

Moclin was specifically built to watch the territories of Granada. Its Arab castle was declared National Monument, and it is located in a setting of great landscape beauty.

Alcala la Real was, for centuries, a border between Muslims and Christians. Located near a hill and it stands out by the Fortaleza de la Mota, which oversees the whole town and the walls that protect the Mayor Church Abacial and the Citadel.

Holm Oak forests and bushes surround Priego de Cordoba, with its impressive Arab Castle, restored by the Christian afterwards. Its old neighborhood is an example of Andalusian architecture, with whitewashed houses, narrow alleys and geraniums in the facedes. 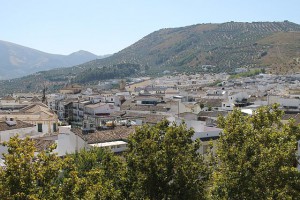 Do not forget to taste in this area a salmorejo (cold tomato cream/soup), the alfajores (honey and almonds dessert) and certificate-of-origin wind from Montilla-Moriles.

Lucena has been known as The Three-Culture City (Jewish, Muslim and Christian). It was the heart of a Jewish population in that time period of the Al-Andalus. The town was home to a Jewish university school but the wise men ended up moving years later to Toledo, where the School of Translators was founded by them when the city was occupied by the Muslims in 1148.

The latest Granada king, Boabdil, was incarcerated in the Castle of Moral de Lucena.

We are taking a little break right now to rest our legs, but do not miss the Caliphate Route second part episode tomorrow. This second part will take us to the beautiful city of Cordoba.