Sa Dragonera and its “dragons”

The Island of Sa Dragonera is a small Balearic paradise. It is a small island located Majorca and almost attached to it. Geologically, this small island is a continuation of the Sierra de Tramuntana, separated by 800 meters of Mediterranean Sea, with a high ecologic value, declared Natural Park in 1995. 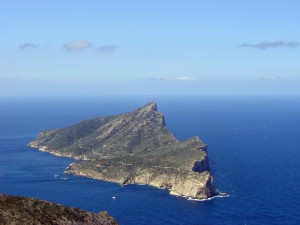 The protected complex of the Natural Park of Sa Dragonera is set up by the very island of Sa Dragonera and two islets, the El Pantaleu and Sa Mitjna, in addition to one important maritime area. The area that is separated from the island of Majorca is made up by sandy bases covered by oceanic posidonia that creates a submerged forest which serves as refuge for a large amount of species.

Birds, ground fauna and endemic flora, like the Estepa Joana (Hypericum balearicum) or the Gatell (Salix atrocinerea) made this little island their own home. The monk seal was an autochthonous Mediterranean mammal that used to live here, sadly it ended up disappearing. Fortunately, we still can see cetaceans such as the common dolphins, as well as the bottlenose dolphins. Notwithstanding, the big protagonists of this setting are, without a doubt, the “Wild Lizards”. These little animals really made themselves at home on this island, since they can enjoy a great deal of security for their procreation. But, are these the kind of dragons that throw fire from their mouths? As you can imagine, the answer is no–that is just part of a legend. In Sa Dragonera these reptiles called “dragonets” reign–these lizards are also known as “sargantanas”. Technically speaking, we are talking about the Lilford Lizard: this little reptile lives in little island around Majorca and Menorca with very little human influence. Along with the Balearic toad, the sargantanas are the most ancient ground vertebrate animals to live in the island–they are also high-priority protected species.

As you can see, Sa Dragonera is a natural paradise but it was about to stop being it. In 1974, the company Pamesa bought the island so that it could be transformed into a resort with hotels, casinos and residential areas. Thanks to the ecologists, this project was censored by the Spanish Nation Court of Law and, in 1987 the local authorities bought the island and converted into a Natural Park.

In order to get to Sa Dragonera, we can do it from the Port of Sal Elm or from the Port of Andratx by a small boat. Once there, there are several excursions by foot you can do that will help you walk around the island with short-distance walks. Sa Dragonera is also a sought-after visit for Majorca’s scuba diving lovers.