10 places to enjoy Madrid from the heights 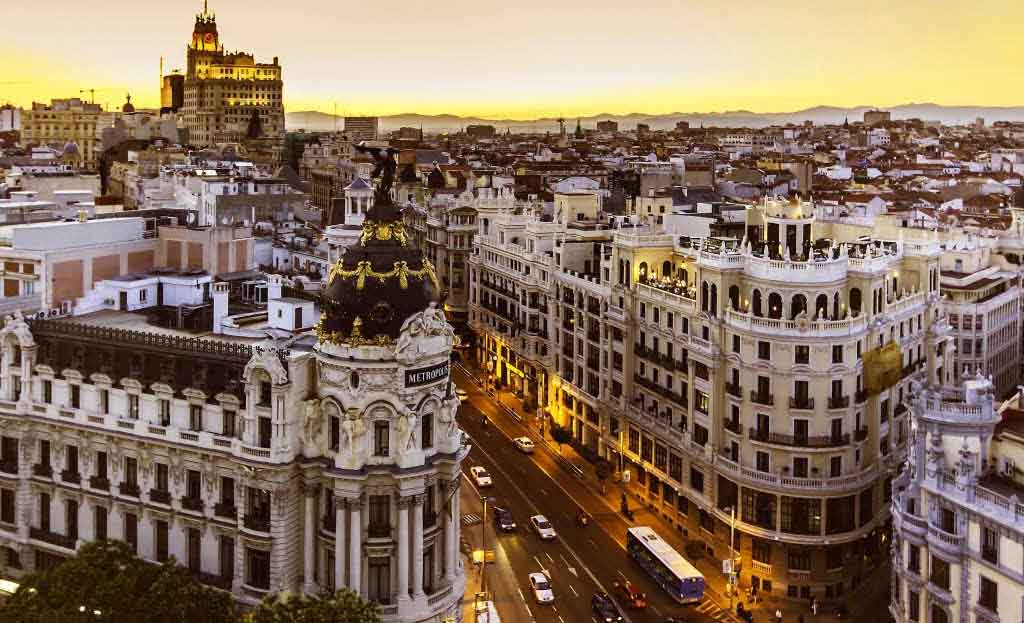 No matter how hard we try, it is really difficult not to use the phrase “From Madrid to heaven”, so we might as well say it right from the beginning and leave it behind already.

Today, we are here to suggest you 10 places you should visit in order to enjoy a once-in-a-lifetime experience of Madrid from the heights. These places do have a privileged viewpoint overlooking the big city of Madrid. The views are totally compatible with, for instance, a sunset picnic, a round of beers and a few tapas at a charming terrace, take a dip in a swimming pool or a visit to a historical monument.

Please, do not mind the order, it is totally random:

The Círculo de Bellas Artes has in its penthouse one of the most popular viewpoints of Madrid. It offers privileged views of the Gran Via and the Calle Alcala junction, with the majestic Teatro Metropolis in front and the Telefonica building in the background. We can also see, if we make a 180-degree turn, the Plaza de Cibeles and the Palacio de Comunicaciones—current headquarter of the city’s town hall—with the emblematic Piruli. 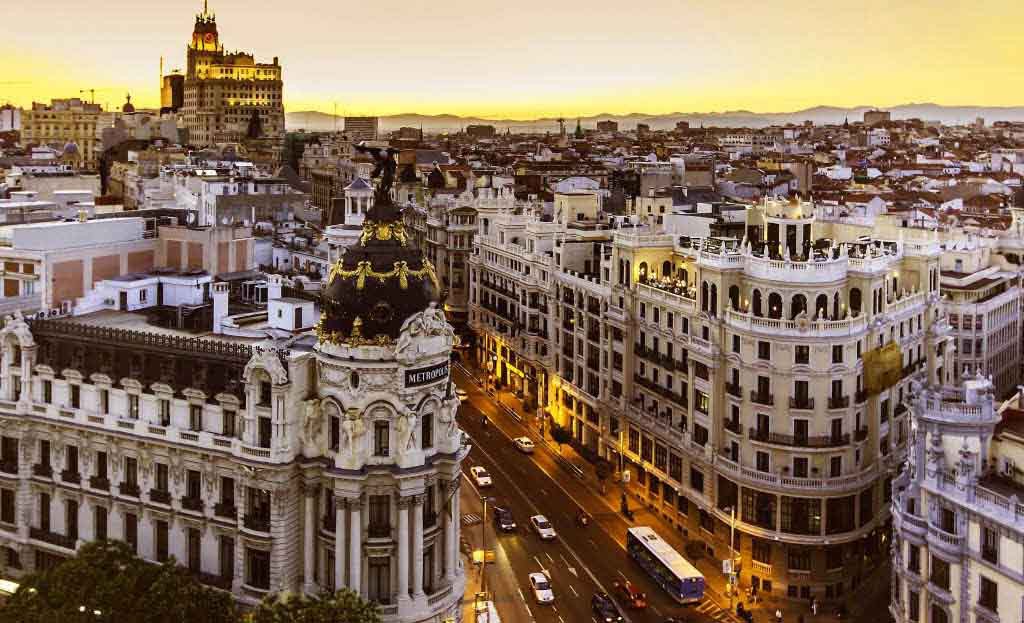 The space is rather large. It has a bar where you can sit back and relax—ideal for a beautiful sunset having a few drinks, as well as a restaurant. During the summertime, the restaurant becomes the Tartan Roof, with a menu inspired in the international street cuisine of South-East Asia and some other Americas countries—revamped with innovative fusion touches. During the rest of the year, you can enjoy the Tartan Migas, which is a more casual approach based on sandwiches, gourmet burgers and other creative small plates—just like it is cited on Eat&Love. On this list, we will show you some other restaurants with terraces in Madrid, which is something that is becoming trendier and trendier in the capital’s heights.

The penthouse access is not free of charge. Currently, it costs 4 € (3 € with the Carne Joven). Notwithstanding, it is also possible to get a combined ticket that grants access to the Circulo de las Bellas Artes exhibition halls for as little as 5 € (4 € with the Carne Joven). This is, without a doubt, your best bet, since the Circulo de las Bellas Artes has some interesting things to see for pretty much the same price.

Still in the Gran Via, yet this time we are getting closer to Callao, where the Gourmet Experience is located. It is located on the ninth floor of the El Corte Ingles building. It is the former cafeteria, now turned into an avant-garde top-notch gastronomic space. It also offers one of the most visited viewpoints of Madrid. 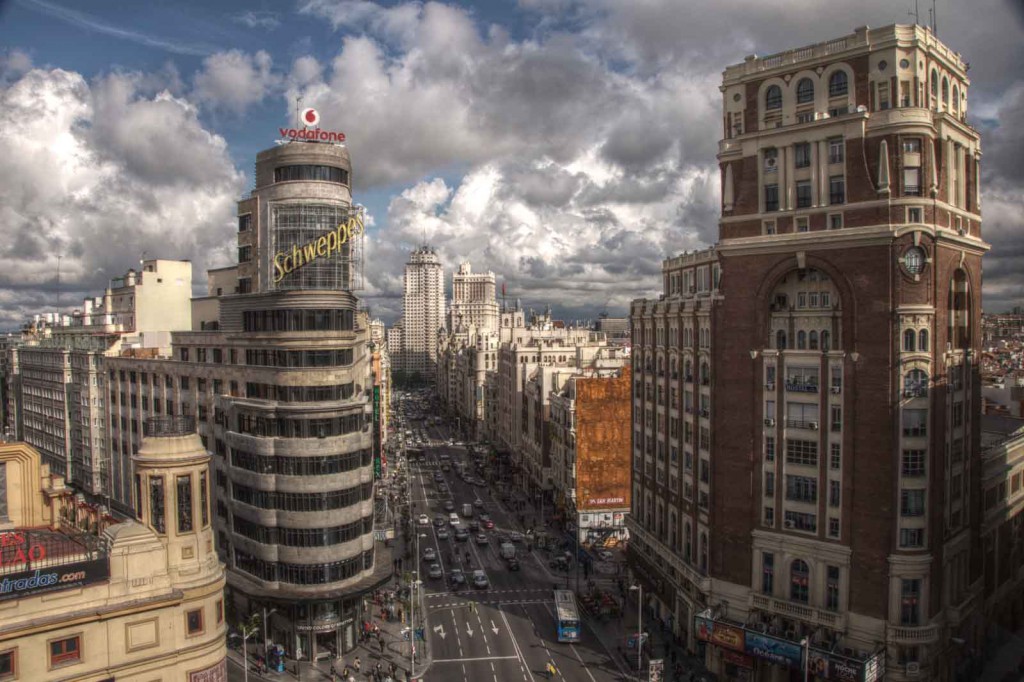 From this viewpoint, we can contemplate one of the most popular images of Madrid, which is the colorful Schweppes billboard, which was one of the scenes from the motion picture El Dia de la Bestia. 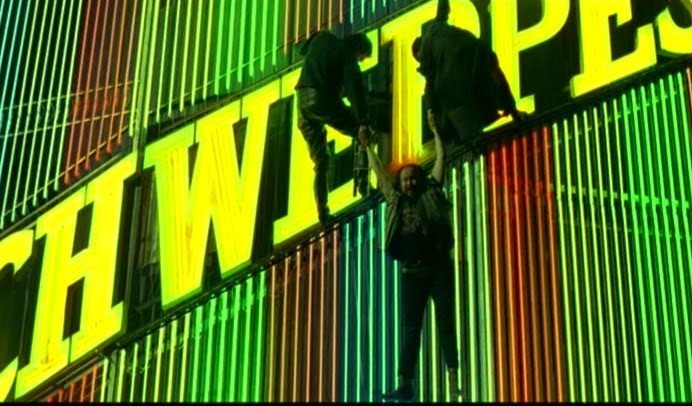 It is accessed through El Corte Ingles and opens through midnight all year around—even with stoves during the cold weather seasons. We suggest you to visit it at night, when the views are just spectacular due to the street light, commercial locals, billboards and vehicles on the street.

The Hat is a youth hostel, of minimalist and cosmopolitan appearance, located in the Calle Imperial—an alley nearby the Plaza Mayor. On the fifth floor, there is a terrace, with food and drinks service. No doubt about it, this is one of the best terraces of Madrid.

This place does not offer any of the most emblematic buildings we have mentioned earlier, yet this is still recommendable. The Hat is a cozy place that reminds us of the old Madrid with a cool touch and privileged views of downtown Madrid’s roofs. 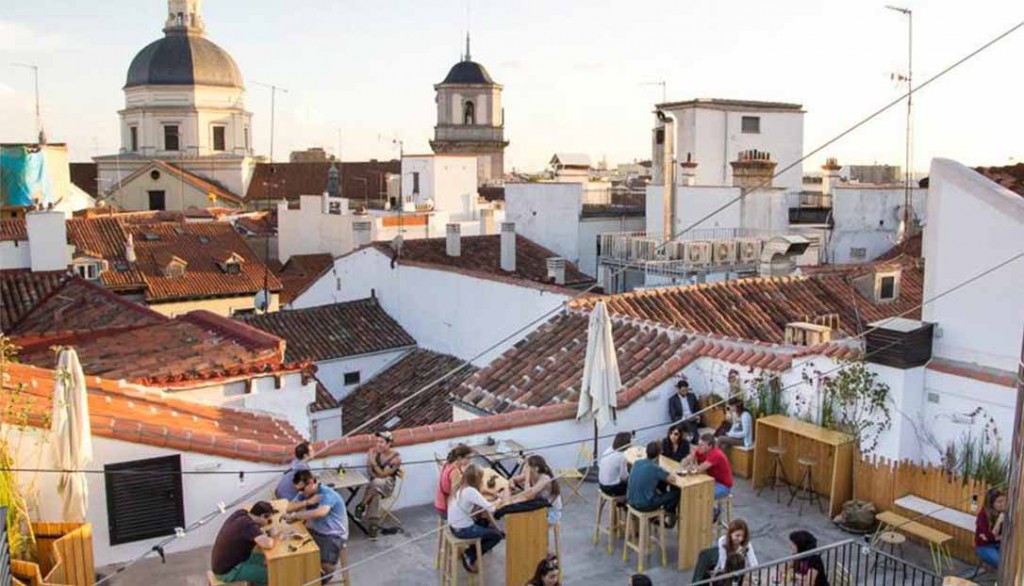 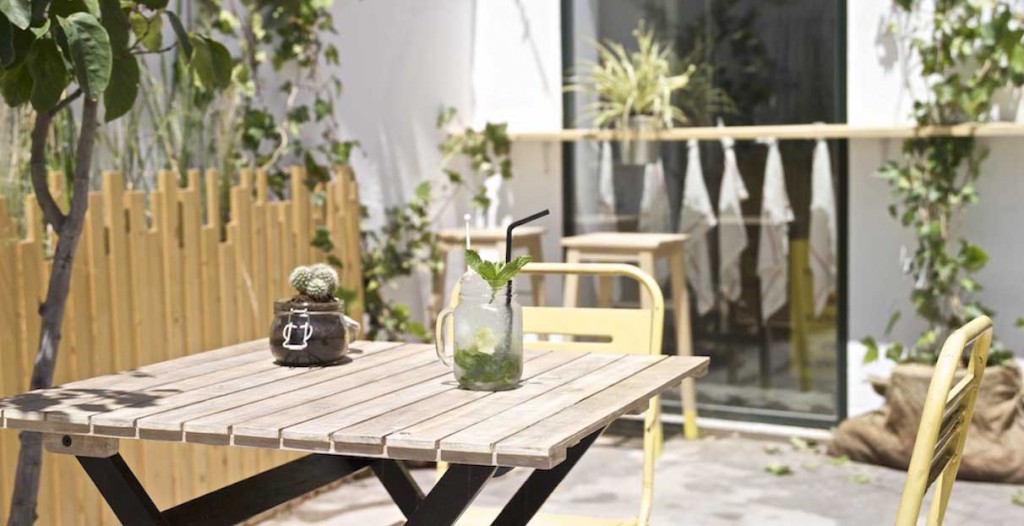 Located in front of the Palacio Real at the Apartosuites Jardines de Sabatini Hotel’s penthouse, this place offers a cozy chilling atmosphere. It also offers a menu of tapas and small plates, designed by the chef Juan Pozuelo–a menu of cocktails is also available. Among the Madrid’s terraces, this stands out for being one of the best of the Palacio Real and its gardens—with a horizon that invites the visitor to enjoy a perfect sunset.

Warning: this place is closed during the wintertime, yet it is available as private events destiny. 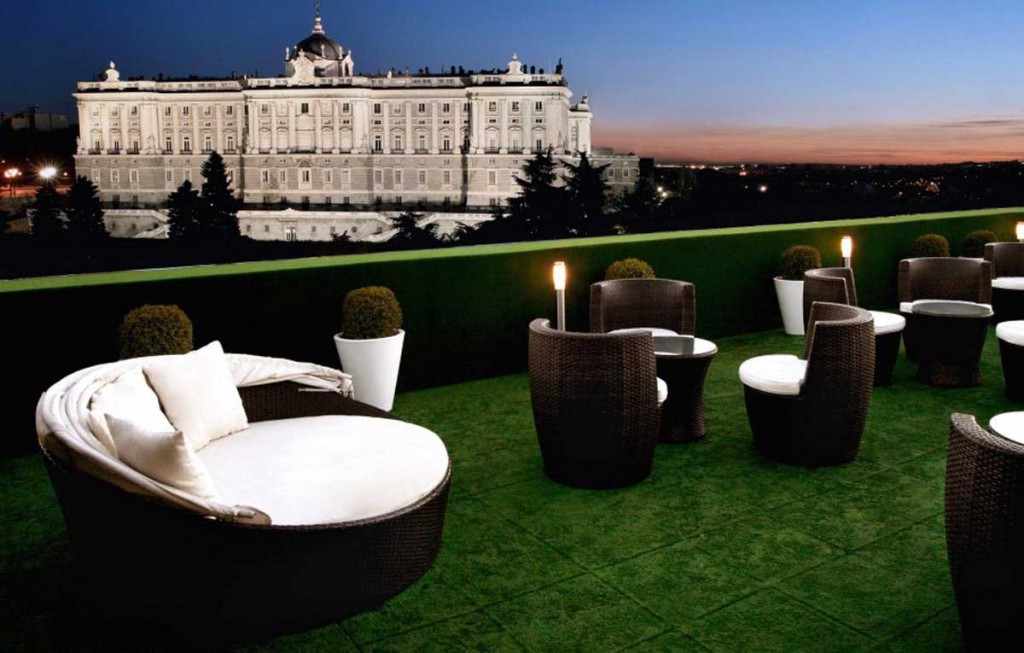 The Templo de Debod is located pretty close to the Terraza de Sabatini—a good 15-minute walk away from it—and the views from its gardens are very similar. At this point, we will be a little bit farther from the Palacio Real, though, and that means that we will not have the same detailed experience. Nonetheless, we will have a better angle to contemplate, apart from the Palacio Real, the Catedral de la Almudena and the Casa de Campo. This is one of our favorite viewpoints of Madrid. 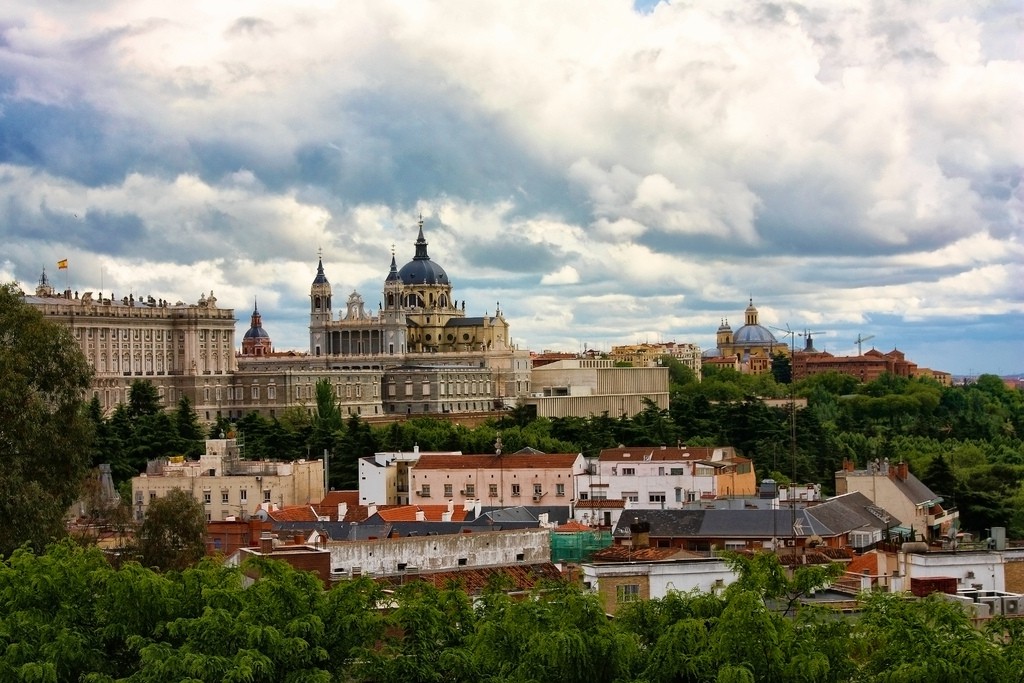 The temple’s penthouse has witnessed a few remarkable events in history.

Firstly, in 1808, this was one of the locations were the French troops of Napoleon’s army shot and killed some rebels, after the working classes of Madrid rioted against the Napoleonic forces in the city. These shootings, which took place in the beginning of the Independence War, were immortalized by Goya in his masterpiece “Los fusilamientos del 3 de mayo”. 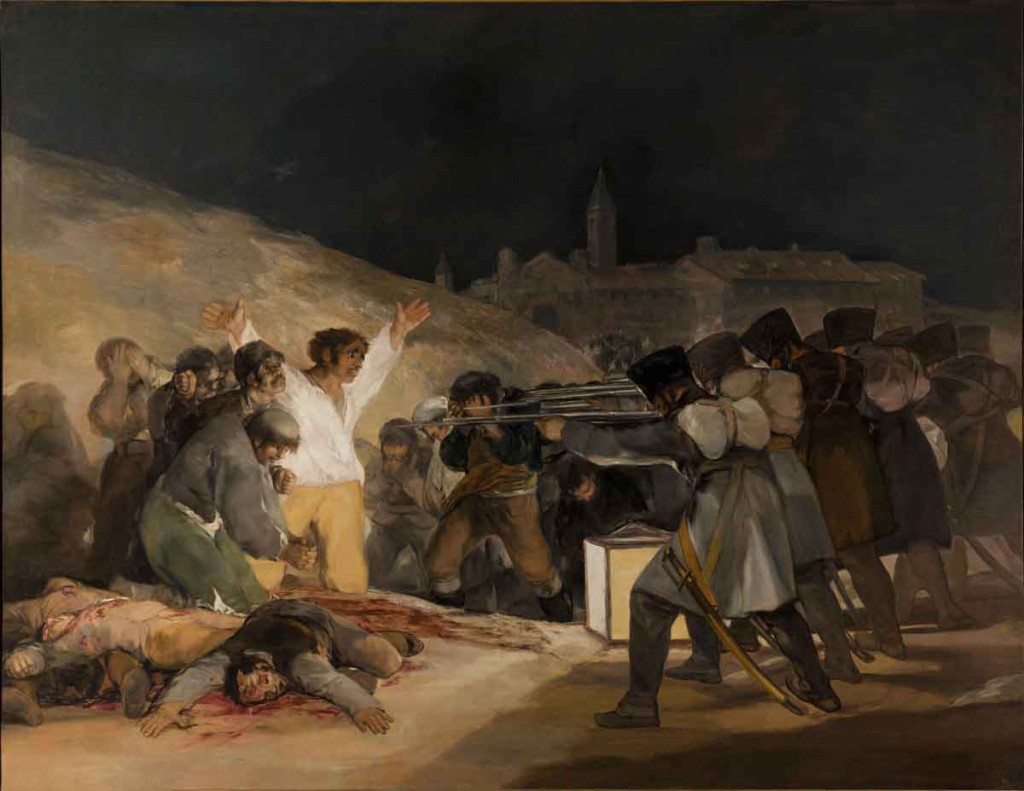 Secondly, in this place in 1860 began the construction of the Cuartel de la Montana (the barrack of the mountain). This barrack was picked by the General Fanjul for the military insurgency in July 1936, along with his 1500 soldiers and 180 Phalangists. The building was badly damaged after the assault, and later after it was taken, since the troops that were loyal to the Republic, the Guardia de Asalto, the Guardia Civil and heavily armed popular militias.

The subsequent events, during the Spanish Civil War, made the barrack become a complex of irrecoverable ruins.

A century later, an Egyptian temple was erected on this very same site, the Templo de Debod (Debod’s Temple). This temple was dedicated to both Amon of Debod and Isis—it was built between 185 B.C. and the 1st century, when it was donated by Egypt to Spain in 1968 back in gratitude for the help received in the Abu Simbel temples’ rescue. 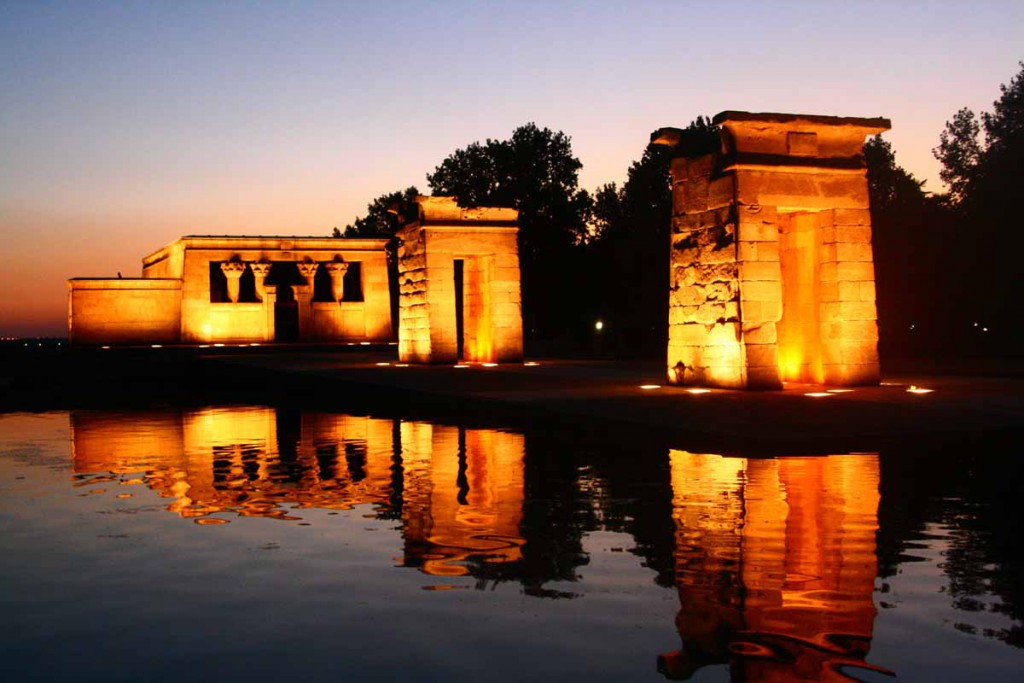 Both the Templo de Debod and the surrounding gardens, where the viewpoint is located so that the visitors can enjoy the mentioned views, are of free access. Albeit some preservation questions, only 60 visitors can enter at a time in the temple, this means you might wait in the line for a while some days.

From May through September, on the 10th floor of the Hotel Emperador, you can enjoy an outdoor swimming pool, surrounded by hammocks and Balinese beds, garden, solarium, snack bar restaurant and chillout areas.

The official name is Roof Garden and it is a garden in the heights of over 400 square meters, with panoramic views that go from the Palacio Real and the Casa de Campo all the way to the Madrid mountain range, as well as an interesting aerial view of the Gran Via.

The list of restaurants with terrace in Madrid is pretty big, but very few can say they have a terrace that high; even less people can claim they own a swimming pool up there.

The Cerro del Tio Pio is a park in Vallecas, also popularly known as “Parque de las siete tetas” (The Park of the Seven Tits) due to the shape of its hills.

This is a quiet place, perfect for a picnic day, to practice sports, taking a nap on the green grass or contemplating the sunset in one of the widest panoramic view of the city.

We can even see the “Piruli”, the KIO Towers, the Telefonica building, the Atocha Train Station, the Colon Towers (after Christopher Columbus) or the Cuatro Towers, as well as numerous domes and capitals of the Madrid of the Austrias. Looking south you can contemplate the Enrique Tierno Galván Park as well. 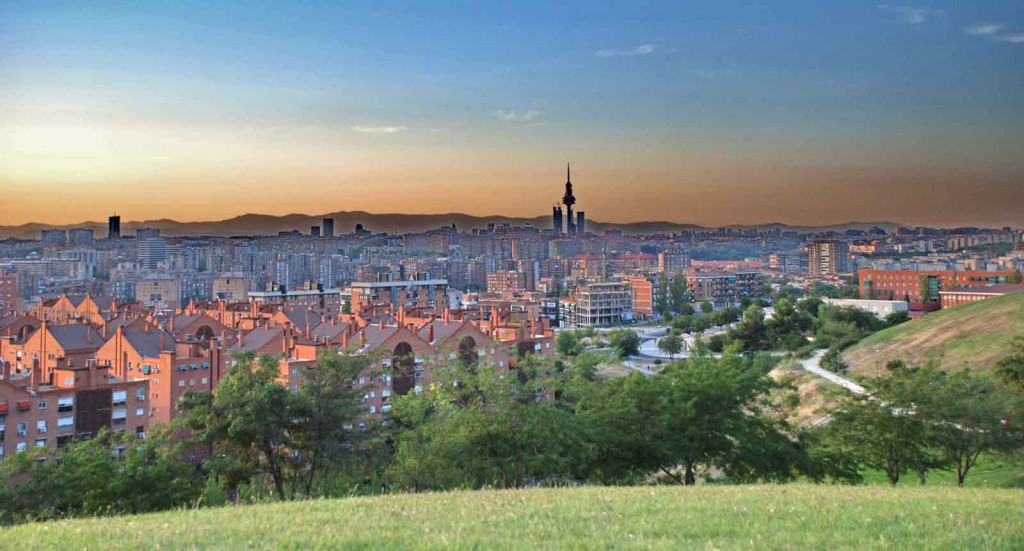 Giving the above, Vallecas can brag about having one of the best viewpoints of Madrid. The park, of free access, has sports facilities on its lower part and bicycle lane, kiosk and viewpoint on its higher part.

The Teleférico de Madrid (cable car) has been running for over 45 years now. It is a bicable system with cabins with capacity of up to six persons. It runs for over 2400 meters and it reaches a height of up to 40 meters.

The ride starts from the Pinto Rosales Walk and finishes in the Casa de Campo with round trips for as low as 5,90 €. Riding it, we overfly the Park del Oeste rose garden, the Principe Pio train station, the San Antonio de Florida chapel and the Manzanares River. The ride ends nearby the Casa de Campo’s Paseos Perdidos (cerro Garabitas). Right at the end of the ride, there is a terrace-view point.

The restaurant Gau&Café, whose grand opening took place in April 2006, can boast about having a terrace with the Lavapies neighborhood’s roofs as the background. It overlooks a “corrala” (corrals) and the brick walls of an ancient church.

It is located in a building that was erected in 1721. It was originally a monastery and a school of the Order of the Piarists. Nowadays, the building is owned by the UNED (e-learning National University in Spain) and it is being used as a library and partner establishment. 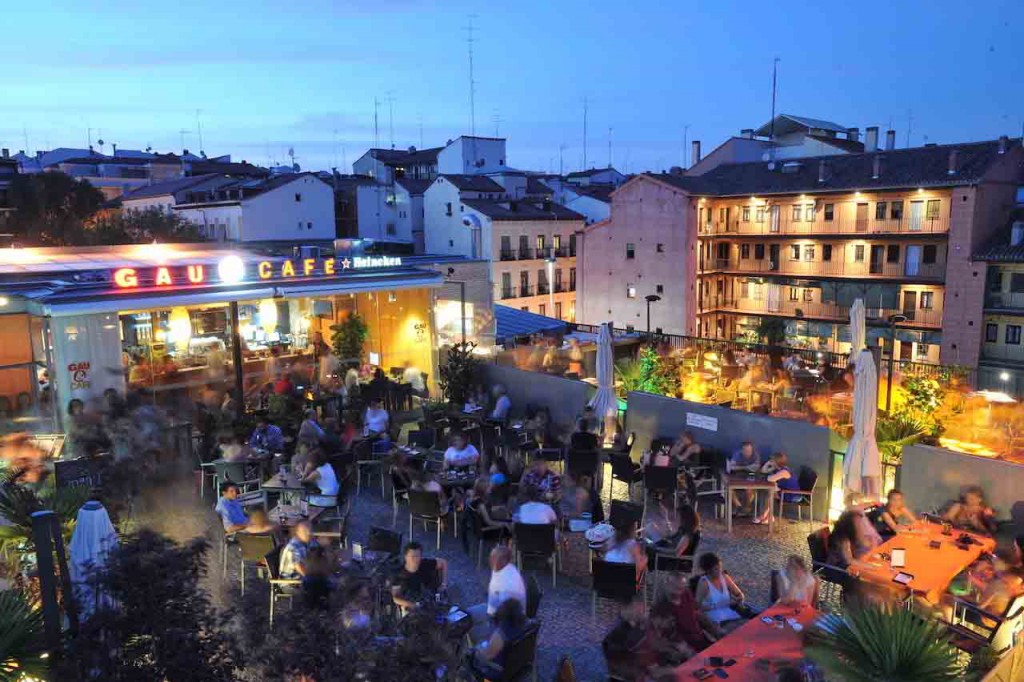 The menu, which changes depending on the year’s season, gets its influences from the world’s best cuisines, especially the Mediterranean ones. During the wintertime, the cozy dining room with panoramic glass offers an interesting terrace, while outside they have stoves that grant a pleasant atmosphere. During the summertime, it is one of the trendiest terraces of Madrid for those who want to have a few drinks enjoying the sunset.

The panoramic elevators go through as many as 92 meters and transport visitors up to the Faro de Moncloa’s viewpoint—which emerges right from the heart of the University City of Madrid. This is actually an old lighting tower, built in 1992—which is the year when Madrid was picked as the Europe’s Cultural Capital. For the record, it stands 110 meters high.

Just let your eyes get lost through those huge windows while contemplating outstanding pieces or art, namely, Palacio Real, the Catedral de la Almudena, the Telefonica building, The Four Towers and, in the background, the Guadarrama mountain range. The viewpoint’s access price is as little as 3 €.

Well, it’s a wrap! We have compiled our favorite viewpoints of Madrid, as well as some of the best terraces in Madrid, in our opinion. Car Hire at Madrid Airport or car hire at Atocha are the best option to be able to enjoy your trip to the capital with as much independence as possible. Not everyone who is anyone is on our list, but everyone on it is a somebody. Please, be sure to leave your comments—did we miss out anything on this list?