Park Güell in Barcelona: Everything you need to know about Park Güell and its surroundings 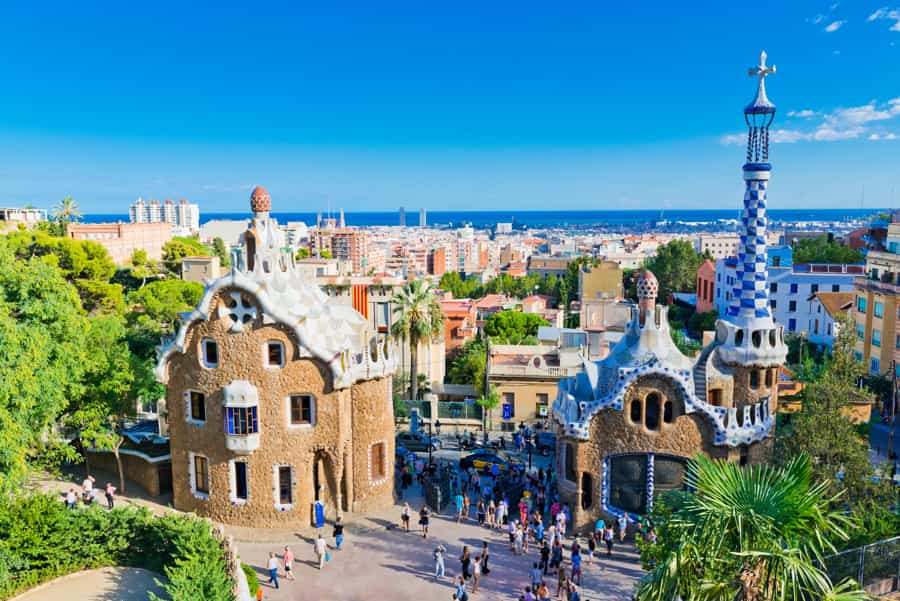 This post is also available in: Spanish German Portuguese Greek

When we talk about Park Güell, we are talking about one of the largest green spaces in the city of Barcelona. It’s also one of the most emblematic tourist attractions in Barcelona.

Where is Park Güell located?

Park Güell sits between the neighbourhoods of La Salut, Vallcarca i els Penitents, Coll, Carmel and Can Baró, in the districts of Gràcia and Horta-Guinardó.

More than 75,000 people live in the area and enjoy the green spaces of Park Güell. Its location on the hill of Muntanya Pelada and Carmel makes this green space a unique place of leisure for locals and visitors alike. Simply put, Park Güell is one of Barcelona’s must-see attractions.

Work started on Park Güell in the first fifteen years of the 1900s and it was finished in 1926. It was created and founded by Eusebi Güell.

Eusebi Güell was a count and rich entrepreneur from a bourgeois Catalan family, and a close friend and patron of Antoni Gaudí. Gaudí not only designed the structures in Park Güell, but he also designed the Güell Palace and other spaces belonging to this influential member of early 20th century Barcelona society.

Güell and Gaudí envisaged the park as a space in the city with an incomparable natural landscape that would also have high-quality, technologically advanced homes. It was to be a coming together of luxury, symbolism and mythology in a natural setting, infused with the political, religious and social ideals of the age.

What to see and do in Park Güell: a good place to visit in Barcelona

As we have said, Park Güell is so wrapped in artistic symbolism it’s almost like visiting a museum. So here are the must-see spots if you visit Park Güell. Take note!

Do you have to pay admission to visit Park Güell?

Park Güell is one of Barcelona’s most visited attractions, and in order to control access to it, a fee has been charged since 2013 to enter the monumental area of the park. However, access to the rest of the park is free and unrestricted.

Other things to see in Barcelona besides Park Güell

Planning a trip around Barcelona presents countless options. If you arrive at T1 or T2, it’s best to pick up your rental car at Barcelona airport and get on the road straight away. If you arrive by train to Barcelona and you want a vehicle so you can get around Catalonia at your own pace, car or even motorbike rental at Barcelona Sants train station is another option available to you.